BY GENE STOWE, FOR NDWORKS

When the Notre Dame women’s lacrosse team was paired with Bobby Russell last fall as part of Fighting Irish Fight for Life, a Student Welfare & Development program, midfield player Katherine McManus was immediately drawn to the 6-year-old who had been undergoing cancer treatments since he was 2.

“There’s something really special about that kid,” McManus says. “He’s such a sweet, sweet kid and so inspiring. He has a special light around him.” 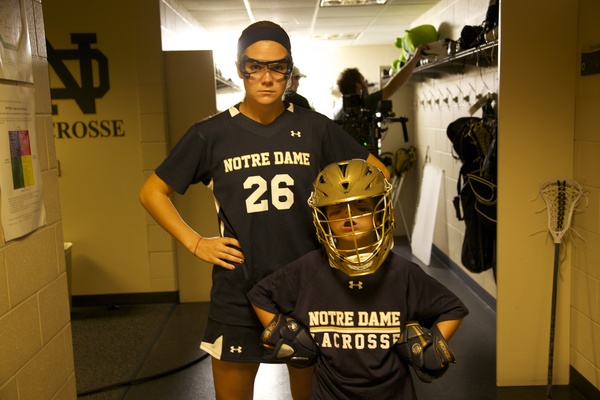 The relationship grew so close that Bobby called McManus “my girlfriend” and she went with him to his monthly chemotherapy treatments at Memorial Hospital, where they would play Bingo and Candy Land and read books together.

“We became really close through that. I went to his party at Chuck E. Cheese for his sixth birthday,” she says, adding that many lacrosse team members enjoyed the connection. “We took Bobby to a lot of games this year, not just our own – basketball, soccer, volleyball. We wanted him to get excited about the other sports on campus too.

“It became so much more than just a community service aspect.”

Their inspiring story has become a video for Live United, a two-decade-old collaboration between the Atlantic Coast Conference (ACC) and United Way Worldwide, including United Way of St. Joseph County, that will be shown on television, online, and on the Jumbotron at basketball and hockey games.

Fighting Irish Fight for Life pairs Notre Dame varsity teams with patients in the pediatric Hematology/Oncology unit of South Bend’s Memorial Hospital so the patients, ages 5 to 18, can experience a part of a student-athlete’s life. The connection starts at a Signing Day where children are introduced to their teammates and sign a “letter of intent” committing to the team.

“They’re fighting for their lives,” McManus says. “It’s great to see how well they do it and the support they have from their families. It was really fun to be a part of.”

In addition to the organized Fight for Life events, including a Christmas party, a visit to a lacrosse game, and participation in Notre Dame’s Relay for Life, McManus went to his monthly Thursday morning chemo treatments. 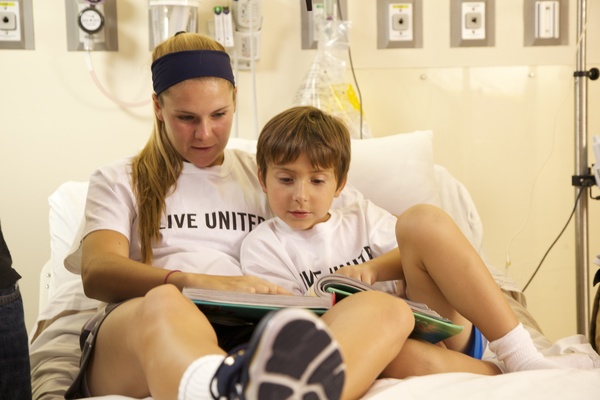 Robert Russell, Bobby’s father, says the relationship helped through the last year of chemotherapy. Bobby was diagnosed with non-Hodgkin’s B-cell lymphoma on Feb. 14, 2011, at age 2, and received treatment until May, when he was declared cancer-free.

“As these monthly visits went on, Katherine was really the regular,” he says. They really took a liking to each other.” When Bobby was honorary captain at a lacrosse game, his jersey number was 25—Katherine’s is 26—and his locker was next to hers.

Katherine, who had been around young cancer patients while she was growing up in Massachusetts because of her mother’s work at the Dana-Farber Cancer Institute, found herself thinking of ways to help Bobby’s family whenever she had a break in her schedule.

“These illnesses not only affect the child but they affect the family and the friends and the whole network,” she says. “I knew how deep sometimes these illnesses can cut into someone’s life. There’s something so special about Bobby. It didn’t feel like a service after the first few times I was with him.

“The way he attacks his cancer treatment and everything was amazing. He had this special life about him. He was so unfazed, so generous. It gave me a strong sense of perspective. I grew a lot as a person. I came to understand a lot more about myself and how the world works and the importance of perspective.”